The Canadian Grand Prix has been held on the Île Notre-Dame since 1978. Probably the most legendary Montréal race from a German point of view took place on June 10, 2001, when for the first time in the history of Formula 1 a pair of brothers finished at the front.

The reigning world champion and big brother Michael Schumacher was only able to offer his first congratulations on the Circuit Gilles-Villeneuve on Sunday. More than 20 seconds down, the Formula 1 superstar finished second at the 2001 Canadian Grand Prix after winning four of the first seven races of the season.

The younger Schumacher brother Ralf, who had put on a real hussar ride on this summer’s day, was celebrated as the happy winner in Montréal.

The Williams-BMW of the German was stronger than ever in that year 2001 anyway. The high-speed routes in particular suited the British-German team’s racing car, which was fitted with Michelin tyres. This also applies to the 4.361-kilometre circuit on the Île Notre-Dame with its long casino straight before the start and finish.

The eagerly awaited brother duel had been announced for months this year. However, Formula 1 fans were repeatedly disappointed, as Ralf Schumacher in particular had to struggle with some performance problems. Despite the competitiveness of his Williams BMW, he retired five times in the first seven races and survived several accidents unscathed.

Michael and Ralf Schumacher pull away from the competition

In Montréal, however, there was finally the big showdown between the now three-time world champion Michael and challenger Ralf. The Schumacher brothers already dominated in qualifying on Saturday and raced together into the front row of the grid.

Michael Schumacher was able to defend his pole position at the start and turned into the first chicane in front of Ralf. A highly exciting duel quickly developed between the two, which was to characterize the entire race.

Michael and Ralf pulled away lap after lap at the front, the assembled competition around the McLaren Mercedes drivers Mika Häkkinen and David Coulthard had nothing to order that day.

For 44 laps, the younger Schumacher practically followed his brother right behind, but without being able to start the decisive manoeuvre.

For 44 laps, Ralf Schumacher couldn’t get past his brother Michael (right).

The decision to win the race had to be made in the pit lane. In the 45th of 69 laps, Michael Schumacher was the first to make the first and only stop. Since refueling was still being carried out in 2001, the Ferrari star came back onto the track with significantly more weight than his brother.

Ralf Schumacher now sensed his great opportunity in his lighter Williams-BMW to gain the decisive advantage for a place swap at the top. And indeed: For four laps, the then 25-year-old just flew around the course, making up the urgently needed seconds on his six-year-old brother.

After his refueling stop, Ralf returned to the track with a lead of almost four seconds and thus brought about the decision. In the last 18 laps of the race, Michael Schumacher was no longer able to match the speed of his little brother and, with a large deficit, finished second. 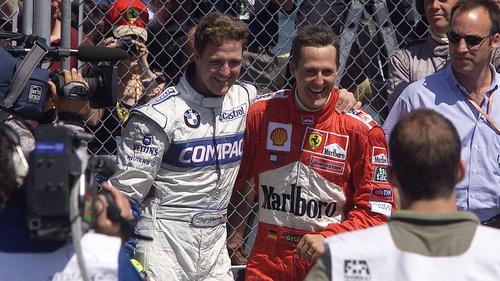 Seldom before has Michael Schumacher (r.) celebrated second place as exuberantly as in Montréal 2001

Three years after Michael first and Ralf third made Formula 1 history in Monza as the first pair of brothers to get on the podium, the two have actually gone one better.

The later record world champion and his brother were exuberantly happy, both cheered completely euphorically together with the third Mika Häkkinen on the winner’s podium.

“I think mum and dad are very proud of us,” said Michael Schumacher afterwards about the first double victory of two brothers in the premier class of motorsport.

“Ferrari copy”? This is how Haas team boss Steiner reacts

Formula 1: A wild sky striker with a flaw